I guess most of us like to put a face to name you don't know; or even a name to a face you do know.

To help you out with the former condition, you'll see here a series of shots taken at various stages of my life. Only one photo is by a professional; the remainder from myself and other family or friends. So, I'll apologize now for the less than professional results of my efforts on display. But ... digital cameras allow even the inexperienced operator to provide something of reasonable quality. 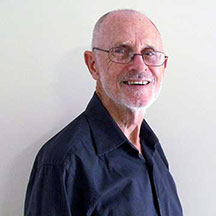 Above is the very latest selected by my wife and partner. If I look tired, haggard and very much my years, all I can say is: it was all my fault. 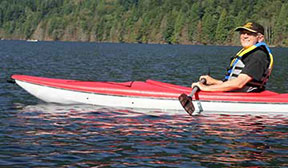 In 2012, I went to see my daughter and twin sons in Canada. Stayed a month, travelling to Vancouver to visit a son (who snapped this shot) - near where the above shot was taken - then to Calgary to see the daughter, and finally Toronto for the second son.


Exhibit D: Not the morning after the night before....

This one was taken in early 2005. Notice the presence of real hair on top, albeit showing serious signs of thinning out. The rot had set in. 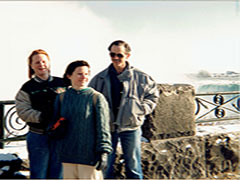 A day out with my nieces who were visiting me, with their parents, in 1991. I was showing them (and showering them with) Niagara Falls, on the Canadian side.

This was one of those obligatory snaps taken either just before or just after my first marriage in 1965; can't exactly recall. But as memories go, I can only repeat what Rodney Dangerfield quipped long ago: "My wife and I were very happy for twenty years. Then we met." (Just kidding!) Oh, btw, notice the deep facial lines - early evidence of the effects of too much smoking and boozing in Papua-New Guinea between 1961 and 1964, I kid you not. And, lookit ... he was only 23, for Pete's sake!.... 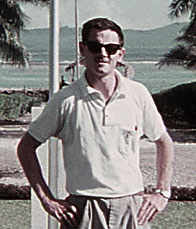 The late, life-long friend of mine, Peter Hill, took this shot - looking west - one Saturday morning in mid-year 1962 at Pomio Patrol Post, which is on the south coast of New Britain. I was just twenty. What an arrogant-looking so-and-so ... but, at least I wasn't a bodgie!

Exhibit H: Off to The Big Adventure 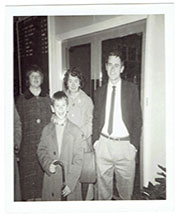 This was taken on the evening of August 11th, 1961. How do I know that for sure? It was my youngest brother's birthday (shown to my right, at front). And there was I, sort of supporting the door jamb, trying to extricate myself from my family and stagger onto the aircraft to travel to Papua-New Guinea.

Well, now ... Bedee! Bedee! That's ... that's all folks! You don't really want to see another toddler on a highchair or another baby in a stroller - right? Natch - neither do I.

Thanks for your interest.